Bojutsu, the art of the Staff, or simply stick fighting has been an integral part of the Hontai Yoshin Ryu-Takagi Ryu throughout it's history. Becoming especially prominent in the time of the 3rd Soke Takagi Gennoshin when in a friendly contest he pitted his skills against Okuni Kihei of the Kukishin Ryu, who was also a student of Tendo Ryu Naginata.

From this contest it was decided that while the grappling methods of the Hontai Yoshin Ryu, Takagi Ryu were superior, the Bojutsu methods of the Kukishin Ryu came out on top. The two decided therefore to combine the schools to benefit from the best both had to offer, so from then on both schools were passed down together.

This was further cemented when Takagi Gennoshin passed away and Okuni Kihei became the 4th Soke of the Hontai Yoshin Ryu, Takagi Ryu.

Our Bojutsu is seperated into 2 weapons;

*Shaku is a Japanese form of measurement, very slightly longer than a foot in length.

Those familiar with Japanese stick techniques may also be familiar with the Jo, a 4ft long staff usually wielded by practitioners of Aikido, or Kendo, among others. We do not train with this weapon, although a number of the techniques and methods of both Chobo and Hanbo are effective when used with a Jo.

In the modern world it is no longer acceptable to move around carrying weapons as was the norm in days gone by.

As a result many schools of Martial Arts continue to practice their weapon techniques in order to preserve and understand the traditions and strategies associated with them. While this may be usefully adapted to the modern day from a strategy point of view, the physical use of a Japanese sword for example is not practical for self defence. While it would be an extremely effective tool, the legalities of using such a weapon do not bare contemplating!

Bojutsu on the other hand (whether the long or short staff) can be far more useful in this day and age. Even without physically carrying the weapon, other items that may be to hand can be utilised for defence. A walking stick, or umbrella are clear examples of this when looking at the Hanbo, as are pool cues, broom sticks and any number of garden tools when thinking of Chobo.

Once a student has gained the technical skills of using these weapons, along with the strategies applied, they can be used effectively in any number of situations. 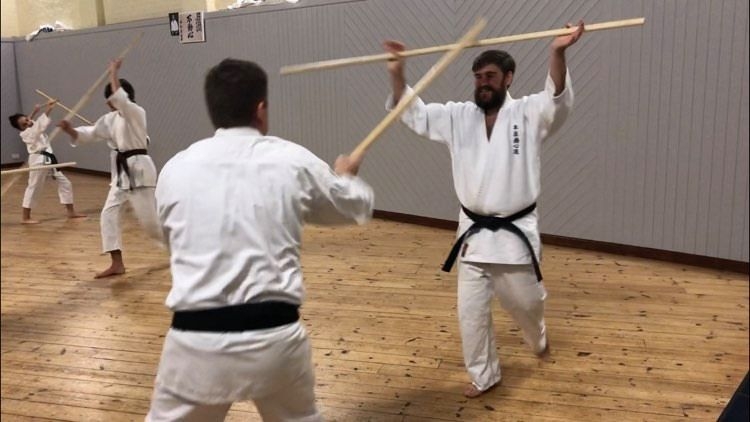 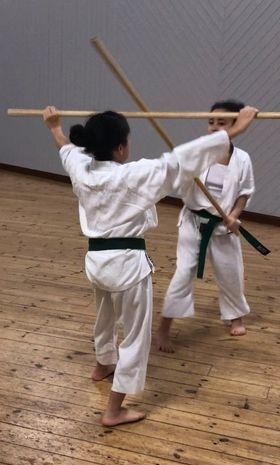 The Kukishin Ryu (Nine God Spirit School) is a Sogobujutsu school of martial arts containing the use of numerous weapons including Spear, Naginata, Sword, to name a few, as well as unarmed technqiues, which was founded in the 14th century.

Ryushin Yakushimaru, the founder of Kukishin Ryu, was born in the year 1318, he learned the martial arts and military sciences passed down within his family and went on to have a prolific military career.

It is the Bojutsu of Kukishin Ryu that we are concerned with here, but as with the origins of Jujutsu, there are varying stories regarding the creation of the Kukishin Ryu Bojutsu.

One account suggests that in battle, when greatly outnumbered Ryushin had the blade of his naginata broken off, but was still able to beat off his opponents using the pole he was left with.

Being very impressed with his efforts, the emperor then made an announcement as follows: "God knows your loyalty. You shall change your name from Fujiwara to Kuki."

From this experience, the techniques of Kukishin Ryu Bojutsu were created.

The name itself does suggest however that the 9 demon element doesn't entirely make sense. While it did make sense early on, looking at the kanji of the school 九鬼神流 (9 Demon School) it fits perfectly with the dream of defeating 9 demons... This was later found to be an incorrect translation however as the use of the demon character 鬼 was a result of simplification of an older Chinese character which actually means Holy Spirit. Given the time when this was formed the original reading would have been the correct one, which is something more akin to '9 God Spirit School' which doesn't fit with the demon narrative.

As with many of these legends though it is generally best to pay attention to what is behind the story rather than the specific details, as these become warped through time as the stories were often only passed verbally. What is clear from the above (whatever the origin) is that the Bojutsu techniques are closely related to Naginatajutsu and Sojutsu, but don't rely on a blade.